For centuries the Yoruba people have shared a common language and culture but have never been a single united group.  It is believed they migrated from Central Africa to their present locations in West Africa over a thousand years ago. The Yoruba established numerous kingdoms, which were centered around a capital city or town and were each ruled by a king or oba. These towns have become modern-day cities that are spread over Nigeria, Benin, Togo, and Ghana.

Traditionally, a king was both the spiritual and political leader of a kingdom with supreme authority. He ruled by divine right and was considered a sacred being. Today, Yoruba kings have no political power. They are figure heads and serve in ceremonial roles.

A Yoruba crown is a king’s symbol of power and status. Modern Yoruba kings usually have several different beaded crowns and caps which are worn on state occasions and during public functions.

Yoruba crowns are called ade or adenla. They are cone-shaped, with features and designs that are built up, then the entire surface is covered with brightly colored beads. Elaborate glass beading is a sign of royalty. They emphasize the wealth and status of a king. Each bead color represents a different Yoruba god. Since the king is protected by all the gods, the colors symbolize his divinity.

Ade refers to any royal cap or beaded headpiece, even some crowns. The images on these may express a king’s personal interests or taste.

A great crown with a beaded veil is called an adenla. Each part of an adenla has a purpose, and every motif symbolizes kingship. The veil on a crown protects people from the king’s powerful gaze and signals his connection to the gods. Stylized faces are a way to remember a royal line, honor ancestors, and represent ancestral kings or Yoruba gods. Birds represent a king’s ability to mediate between spiritual and secular worlds, but also allude to the powers of women. Triangles and diamond shapes reflect a crown’s sacred qualities. Interlace patterns refer to the continuity and balance of life. An elephant is a symbol of longevity and power. Many of these traditional designs are still being used to create modern adenlas. However, it is important to remember that the meanings and motifs on a crown can vary among the Yoruba. 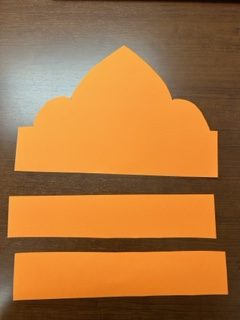