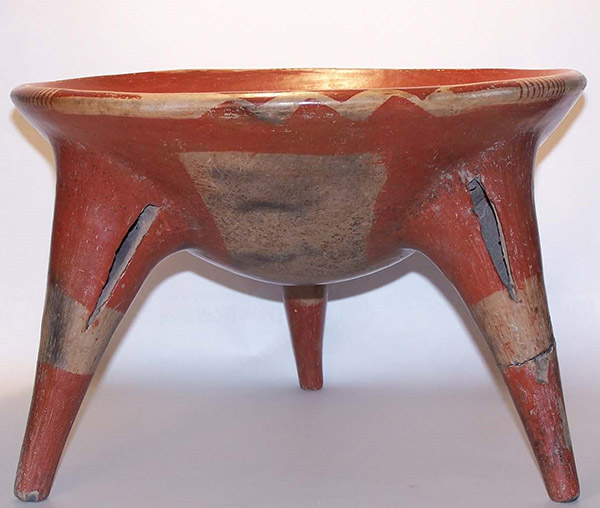 Chupícuaro is a late Pre-Classic archaeological culture located in west central Mexico.  It is best known for its bold polychrome ceramics like this tripod bowl, which dates to between 300 BCE and 400 CE.  Chupícuaro pieces take a variety of forms including hollow figures, jars, bowls, and the characteristic “spider-leg” tripod, with long, thin legs, seen here.  The vessels are made of a brown clay, which was moderately fired and then burnished.  Most designs are geometric and are categorized by archaeologists into a number of color schemes.  This bowl is an example of “Red on Buff,” where the buff background is the natural color of the clay.

The Chupícuaro culture is part of a larger designation called the West Mexican Shaft Tomb Tradition. This tradition ties together disparate cultural groups with a common practice of burying their dead in shaft tombs, subsurface burial chambers cut into the ground that are accessed by a vertical shaft.  These burial chambers often hold a variety of grave goods including numerous ceramic vessels containing food and drink offerings to the dead.  Bowls like this one would have held food for the deceased.

West Mexican Shaft Tomb ceramics are popular with collectors and are often reproduced with the intent of passing off high-quality forgeries as authentic.  Some fakes have even made their way into museum collections.  Real West Mexican Shaft Tomb ceramics have dark, lustrous, and blotchy stains on their surface resulting from necrophilous insects that fed on the dead bodies in the shaft tomb, as well as from bacteria that grew on the ceramics.  On this piece, you can see the small dark blotches on the underside of the bowl, showing that it came from a gravesite.

This bowl is currently on display in Culture at Stake, where you can learn about its connection to unethical collecting, the consequences of looting, and what is being done to connect it with other stakeholders. 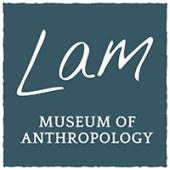